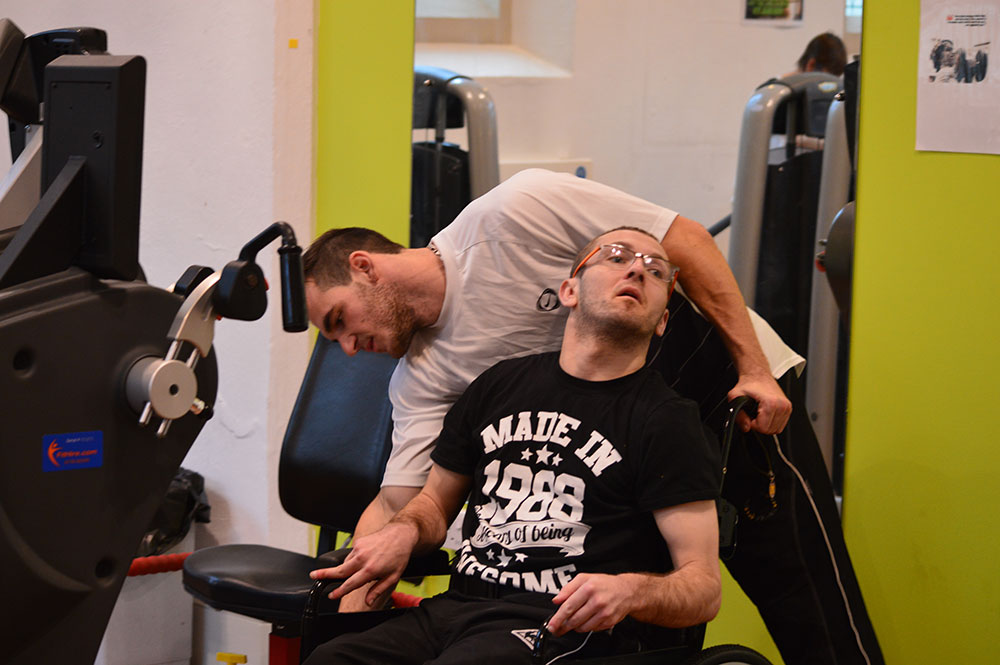 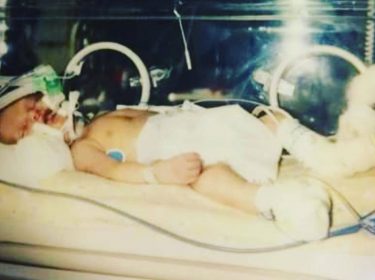 Ryan as a newborn, incubated and closely monitored 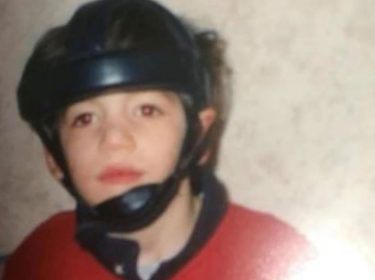 A helmet protecting a young Ryan from the many falls and bumps he suffered as a result of his ataxia. 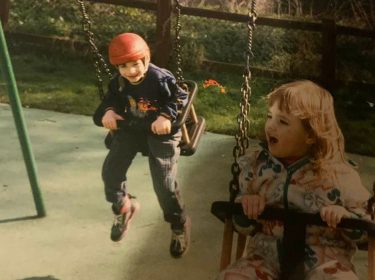 On the swings with his sister 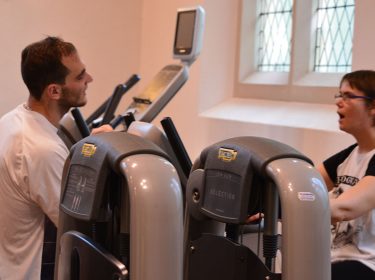 Supporting Elanor at The Meath Gym 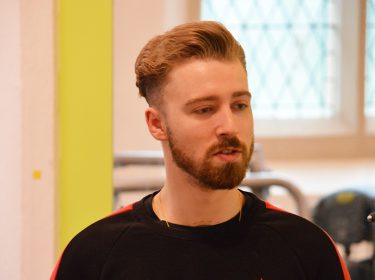 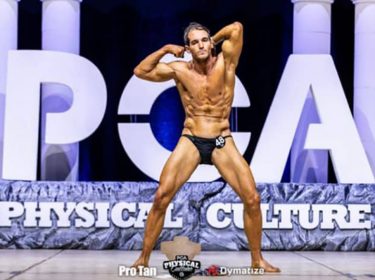 At a PCA Body Building Competition, 2019 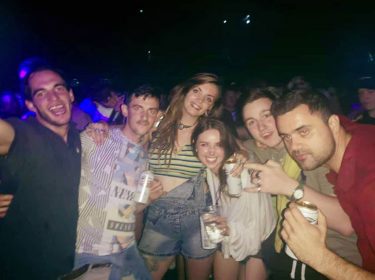 At a concert with friends

Ryan has been a regular Volunteer at The Meath Gym for seven years. He is a popular member of The Meath community, and he travels by train from his supported living accommodation in Bognor to Godalming twice a week to volunteer.

Despite having Cerebral Palsy, and being visually impaired, Ryan prefers to consider himself as ‘alternatively abled’ and his ‘can do’ attitude is ideally suited to enabling the people we support at The Meath to achieve their fitness goals or to maximise mobility and fitness in the gym. Ryan finds that he is often able to show the people he supports that they are more capable than they at first consider themselves to be.

In the hustle and bustle of busy life at The Meath I had only caught some small but intriguing insights into Ryan’s life outside of The Meath, each revelation seems to have made his present-day success and commitment to volunteering at The Meath all the more impressive. Ryan is naturally quiet and understated, therefore the opportunity to learn more about him was fascinating to me.

Growing up with Disabilities

Ryan was born in 1992 in Shoreham-By-Sea. Unfortunately, Ryan’s head twisted badly during birth. He suffered a brain hemorrhage in his cerebellum and was born with Cerebral Palsy and mild learning difficulties. His mother Dawn was advised by doctors that it was unlikely that Ryan would ever walk. She explained, “when he was little no-one was quite sure what the future would be for Ryan and we had some horrible times.”

At two months old Ryan had a Ventriculoperitoneal Shunt (VP) shunt fitted, a big surgical procedure which was needed to help with a build up of fluid around his brain (a condition called hydrocephalus). The shunt drains fluid away from his brain and helps to control the surrounding pressure, Ryan later had five follow up operations, the last of which occurred at the end of Primary school and the VP shunt fitted then remains with him to this day. He explained that while the shunt has been lifesaving, it does present some draw backs for him,

“I have to be careful with sports and I can’t drive. The one thing that really bothers me is that I can’t fly! I have never flown on an aeroplane and I would really love to know what it is like.”

Due to damage to his optic nerves, as a child Ryan could only process the world in two dimension and this, combined with ataxia (poor co-ordination and balance), meant that he was prone to falling over. His mother can recall many trips to A&E and Ryan recounted a particularly memorable event from his childhood.

“I remember being at a playing field and rushing towards a playground, it was full of kids having fun. In my excitement I didn’t notice that the ground wasn’t level and I didn’t see a step. I went flying and as I hadn’t seen it coming, I didn’t even put my hands out to break my fall. I got pretty badly smashed up.”

Ryan attended mainstream school and once at Secondary School he was supported by the school’s specialist learning unit for students with special educational needs. Ryan can struggle with reading and writing and he explained,

“I didn’t feel equal at school. I knew people were mocking me. It caused me a lot of anguish and I would like to face one of my fears by going back to give an assembly talk about disability.”

The impact of this awful experience meant that Ryan’s confidence took a huge knock. However, his natural resilience shone through, and by volunteering at The Meath in his early 20’s, Ryan was able to build up his confidence and gained a huge sense of value from helping others.

Gaining Confidence and Supporting Others

“Although I don’t have epilepsy, I can relate to the people we support at The Meath and to some extent I’ve walked in their shoes. I know how hard it is to take a knock, but also how necessary it is to find a way back up.”

It has been wonderful to see Ryan’s confidence increase over the years. Jack, Fitness Co-Ordinator who works closely with him, commented

Former House Manager Carl Ginns is Ryan’s older brother and we have him to thank for introducing Ryan to The Meath. Carl described how he encouraged Ryan to volunteer at The Meath “I saw first-hand the positive impact that going to the on-site gym had on the residents. I realised that Ryan could make a positive impact as a volunteer as he was a great example of how working out regularly can help with health and confidence, and more so because he could directly relate to the added complexities of being disabled. The Meath were very supportive, and we all saw Ryan’s confidence grow while he helped others.”

Recently Ryan has been particularly pleased with the progress that Dominic has made during some 1:1 sessions with him. He feels that he has gently enabled Dominic who is a wheelchair user, to see that he is able to achieve more and to enjoy exercise.

A Focus on Fitness

Volunteering at The Meath proved to be a great springboard for Ryan to achieve some key life goals. Ryan started a part time job at Westgate Leisure Centre, Chichester in 2018 and is working towards becoming a level 3 Personal Trainer. Passing his Level 2 personal training qualifications was a huge achievement for Ryan and it took him several attempts. The greatest challenge in passing was the theory work but Ryan’s tenacity and determination enabled him to reach his goal. Despite facing some hurdles, Ryan views his disability as an asset for his career,

“It’s a huge help to have a Personal Trainer who can empathise with some of the challenges that a client who has a disability experiences. I was able to work with a client who is a wheelchair user at Westgate and by having a disability myself, they felt that little bit more comfortable with coming to the gym. The fitness world can be daunting for a person with a disability.”

Never one to shy away from a challenge, a few years ago, Ryan also set his sights on body building competitions. Upon coming second in his first ever competition in 2019, he felt inspired to continue. However, the world of Body Building Competitions is heavily categorised. This proved morally problematic for Ryan when he entered and won a disability category competition in Birmingham. He explained that as he was up against an amputee, he felt unable to consider his achievement as a fair win. In his own words

“Just because it was a disability category, it doesn’t mean it was a level playing field. I enjoyed the challenge of competing, but I don’t really feel comfortable defining myself by my disability. My disability is just one aspect of me, and I prefer to focus on what I can achieve. “

With so many achievements under his belt but knowing that Ryan is never without a goal in sight, I wondered what featured most highly on his to do list for 2022. He explained that as he nears his 30th Birthday, he would like to do more to promote disability awareness and conquer a fear of public speaking.

“It would be a huge step for me, but I would really like to give awareness talks to students in secondary schools. I think that I could help them to understand disability better.”

Blushing slightly, Ryan also described how much he hopes to find a girlfriend.

“I keep myself busy, I’m a sociable person, and have a supportive family, but one thing I would really love is to find a girl friend. I think my shyness hold me back.”

A true friend to The Meath, we wish Ryan every success over the next year. With the prospect of in person talks once again on the horizon, it seems that there is much scope for Ryan to support with Meath awareness talks in local schools. Sometimes in life one needs gently coaxing out of one’s comfort zone. At other times one must simply walk on stage and take a deep breath. Hopefully for Ryan one advantage of facing his fear of public speaking is that, in comparison, asking a girl out for a drink will seem like a walk in the park.